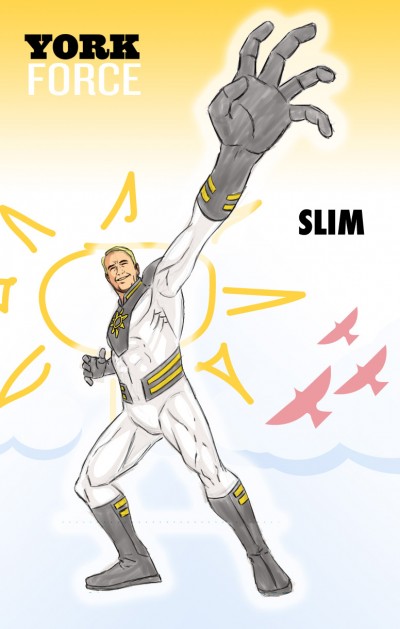 He can stretch his body like a rubber band.

He’s a great listener and an even better friend.

Even on the YORK FORCE, there’s no equal to the man we call Slim!

Slim is practically a mobile command unit for the YORK FORCE. He keeps extras of all the bottles York uses, so his customers never have to do without. In fact, York never sees any bottle orders for his area, because when he picks up a cooler, Slim always leaves more bottles for the next time.

Slim pays attention. He looks you in the eye, which many people find to be part of a strong, comforting presence. It’s a quality that leads many of his Long Island customers to confide in him, to tell him their stories. In fact, if he wasn’t on the YORK FORCE, he’d make a great candidate for mayor!

He’s a guy that loves being part of a community. He’s near the center of every project he’s involved in, and he always gets the job done. He’s like the Karl Malone of York — he never stops and always delivers the mail on time!

His customers know him as Kyle. On the YORK FORCE, he’s a big, strong guy who loves people. He will go out of his way to lend a helping hand to those he loves. And he loves pretty much everyone — just not Dr. Chaos!

On the YORK FORCE, Slim is Kyle … Kyle Barker!